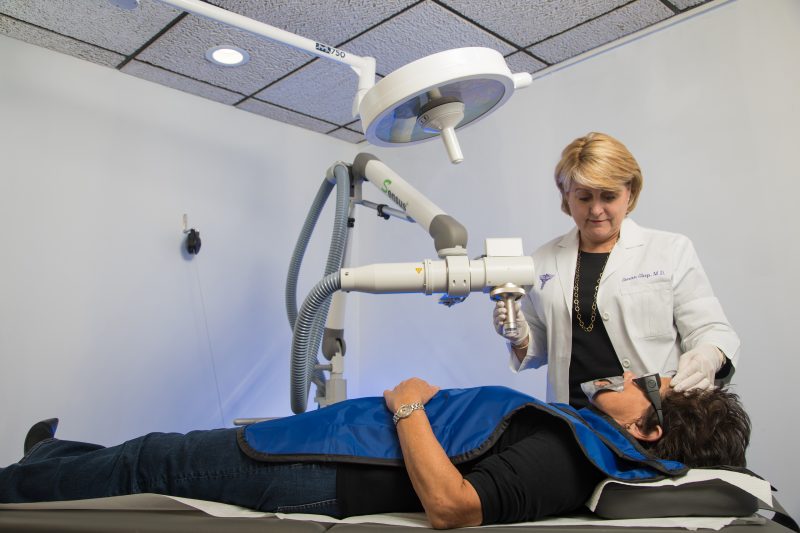 Skin cancer is an unfortunately common cancer — in fact, one in five Americans will develop skin cancer over the course of their lifetime, and over 5.4 million cases of nonmelanoma skin cancer are detected each year. Treatments for skin cancer range from simple excision to radiation, and there are many options for those suffering from any type. Luckily, survival rates for skin cancer are fairly high — especially for those who catch the cancer early.

Radiation treatment has been around for over 100 years, shortly after X-rays were discovered in 1895 by German physicist Wilhelm Röntgen. Initially, the therapy was used as a sort of cure-all; in under a year after its discovery, however, doctors began experimenting with radiation therapy as a treatment for cancer — and they found that it worked. Just a few years later, those same scientists discovered that radiation therapy did not come without its side effects, and it was found that too much radiation could cause cancer as well as cure it.

Even though there are risks, scientists and doctors have sought to minimize the negative effects of radiation through careful study, practice and improvements to the therapy. One of the latest innovations in radiation therapy is the SRT-100™, which utilizes superficial radiotherapy. Superficial radiotherapy differs from standard radiation treatment as it does not penetrate so deeply into the body — this makes it ideal for treating early-stage skin cancer that is still on the uppermost layers of the skin.

Superficial radiotherapy with the SRT-100™ has a number of benefits for skin cancer patients:

Short treatment sessions: Each treatment session with SRT-100™ is less than one minute of radiation time, and it requires no anesthesia or injections so you’ll be out of the doctor’s office quickly.

No scarring or deformities: The SRT-100™ does not damage the skin, unlike Mohs surgery, a skin cancer treatment in which cancer-containing skin is cut away to leave only healthy skin underneath. With superficial radiotherapy, patients do not feel any pain and are left with no scars or other deformities.  Mohs surgery, on the other hand, can cause scarring.

This is especially important in the delicate areas of the face, such as the eyelids, nose, ears and lips —with traditional surgical treatments, positive cosmetic outcomes are difficult to achieve. SRT-100™ can treat these areas with no negative cosmetic results.

No downtime: Since superficial radiotherapy is nonsurgical, there isn’t any downtime involved. Patients can go right back to their lives — work and play — as soon as the session is over.

The best defense is a good offense, as they say, so it’s important to be proactive in protecting your skin to avoid cancer in the first place. Examining your entire body regularly for skin cancer is a good first step, but there are many other ways to prevent skin cancer.

Harmful UV rays are a major factor in skin cancer, so wearing sunscreen when outside in the sun (or even when it’s overcast!) is one of the best ways to protect your skin. Make sure you use the right sunscreen, however, as they aren’t all created equal: broad-spectrum sunscreen blocks both UVA and UVB rays, both of which damage the skin.

Even if you’ve applied sunscreen, you should still try to cover skin to avoid exposure. Wear long-sleeved shirts or beach cover-ups, as well as hats and UV-blocking sunglasses.

Basking in the warmth of the sun feels nice, but it comes at a price. Spend time in the shade instead of in direct sunlight when possible, especially between 10 a.m. and 2 p.m. when the sun’s rays are strongest.

According to the Melanoma Research Foundation, using tanning beds before the age of 30 increases the risk of getting melanoma skin cancer by 75 percent. It may be tempting to have bronze skin year-round, but the risks far outweigh any benefit.

Even though skin cancer can be treatable — especially with the SRT-100™ —  it’s obviously better to never develop it. By protecting your skin with sunscreen and avoiding the sun, coupled with monthly self-examinations and yearly examinations with a dermatologist, you can help prevent skin cancer. If you are, however, that one in five Americans to develop skin cancer, new innovations in skin cancer treatments such as superficial radiotherapy can help you fight cancer and maintain your skin’s natural beauty.